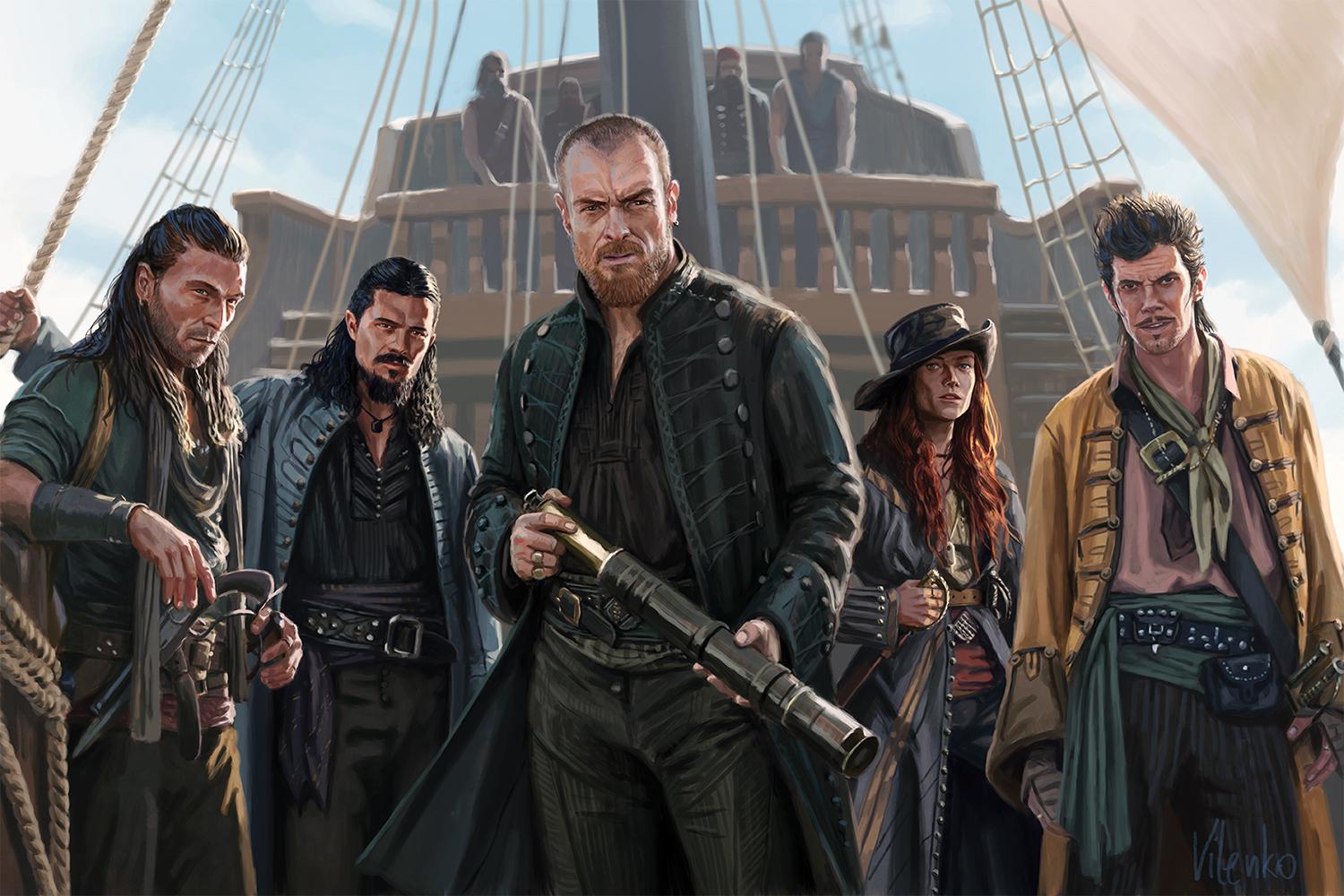 Back in 2014, during different times, when Game of Thrones was still a good show, I heard that a great pirate show was airing. This is how I stumbled upon Crossbones. And that could be the end of the story, since I lost interest after the first episode, being left puzzled about the source of those great reviews.

Then, after a few weeks has passed, all became clear as I started watching Starz’s new historical adventure/drama: Black Sails (this was the show people were talking about from the start). And what a surprise that was. This 4-season series drags you right into the action, hooks you up from the first episode (and mind that the first season is the weakest of all).

The events in Black sails take place in the golden age of piracy (specifically early 18th century) in the Bahamas. On the surface, it’s about pirates, violence, sex, power. But soon you realize, that it’s just a background for something deeper. For politics, storytelling, friendships, defying gender norms, rebelling against civilization.

I already had one mishap by starting the wrong series, but there were more. The first season is actually not that good. It diverts our focus from the real value by providing some cheap spectacle, trying to please the audience by imitating other series that were airing at the time (cough GoT cough). There was actually high chance that I would abandon it after a couple of episodes. Fortunately, the reception was great at Comic-Con and the show was renewed for a second season even before its initial premiere. And it only gets better from there.

Then I actually didn’t pay that much attention during my first watch — it was just running in the background, often while I was doing other things. And this was fine for the first 3 seasons, but then, as I got deeper into the last installment, I started to lose track of the plot. Not because it’s super complex. Not because there are tons of new characters introduced (on the contrary, I think only about 3 major characters are introduced). It was mainly because the last part is less about action, high-sea chases, sword fights, and all this spectacle — and instead focuses on dialogs, closing character arcs, storytelling. Without paying attention, I couldn’t connect the dots and see the big picture.

This is why I recently decided to have a rewatch, and here are my thoughts after my — believe it or not — only second go.

What I liked about it

Obviously for the characters. They are well thought-out and diverse. They clash with each other as often as they work together, given the changing goals and circumstances. And each of them has different motivations, be it glory, revenge, doing the right thing, wealth, or duty. You can’t agree with all of them, you don’t support their choices in every instance, but you have to give it to them: they might be stupid, but are always in character and justified.

For a quick recap:

Everyone has their backstory, and most of them change dramatically during the course of the show. It’s really entertaining to watch their development, how they react to changing circumstances, how they cope with loss and celebrate victories. The plot is built around them, not in spite of them.

This is something that’s close to my heart, so I’m biased, but often the characters… Let’s just say, they can’t answer a question straight to the point, but lay out stories instead. And it’s not only for us, the audience, but this is one of the main themes of the series: how stories shape us, motivate us, how powerful they are. One of the closing dialogs of the series is actually a meta take on the whole plot as a story — what is true, what is remembered, and what it all matters.

With a small exception for season one, the authors had a story to tell, they did it, and they ended it. There are no forgettable last four seasons like in Dexter (don’t get me even started on New Blood). There is nothing like seasons 5-8 of Game of Thrones, where the quality was deteriorating by the minute. There is no 9th Scrubs season the fans don’t even consider a part of the series. You finish your 38th episode (there are only 8 in season one), and that’s it. Complete.

And naturally the finish. It’s gratifying. All the unfinished plot lines converge in the last episode. There are no loose ends… Well, at least if we forget for a moment, that the whole show is a prequel to the Treasure Island novel. Anyway, we’re left with a longing for more, but in my opinion, anything more would spoil the series.

Actually, here are some thoughts comparing the whole series, especially the ending, to Game of Thrones. If you have a spare hour and some more, I highly recommend:

There are some plot holes that bothered me. Most notably: continuity and time. Many times I was lost, trying to figure out how different events relate to each other. And it became especially painful to witness in the later seasons, when the characters were traveling and/or communicating between West Indies, Boston, Philadelphia, England, and others, seemingly in a matter of one episode. In reality, it took a couple of weeks to travel from England to the coast of America, and obviously twice that for a round-trip, and you have to take the weather into account, and schedules… But that fact didn’t stop Woodes Rogers from casually talking to his wife and creditors in England like he had a mobile phone.

Other things were the naval battles. People were killed by the dozens, they were violent, brutal, and full of casualties. But somehow, after each of them, the crews were still plenty of men. Despite having a couple of large ones each season, never had any captain need to worry about filling their ranks. This was more in focus during the first season, when they actually paid attention and talked about the losses, but later on pirates just became cannon fodder.

It’s not a series I would recommend to anyone. It’s not a casual one, you need to be invested in it to truly appreciate the work. It’s violent. And similarly to any Sci-Fi title I watched, I just don’t think the genre can appeal to everyone.

But if you’d love some sword-fighting, gold-hunting, colonialism-battling pirate show: that’s definitely a position you can’t skip. And a very underrated one at that, so there’s a high chance you missed it. 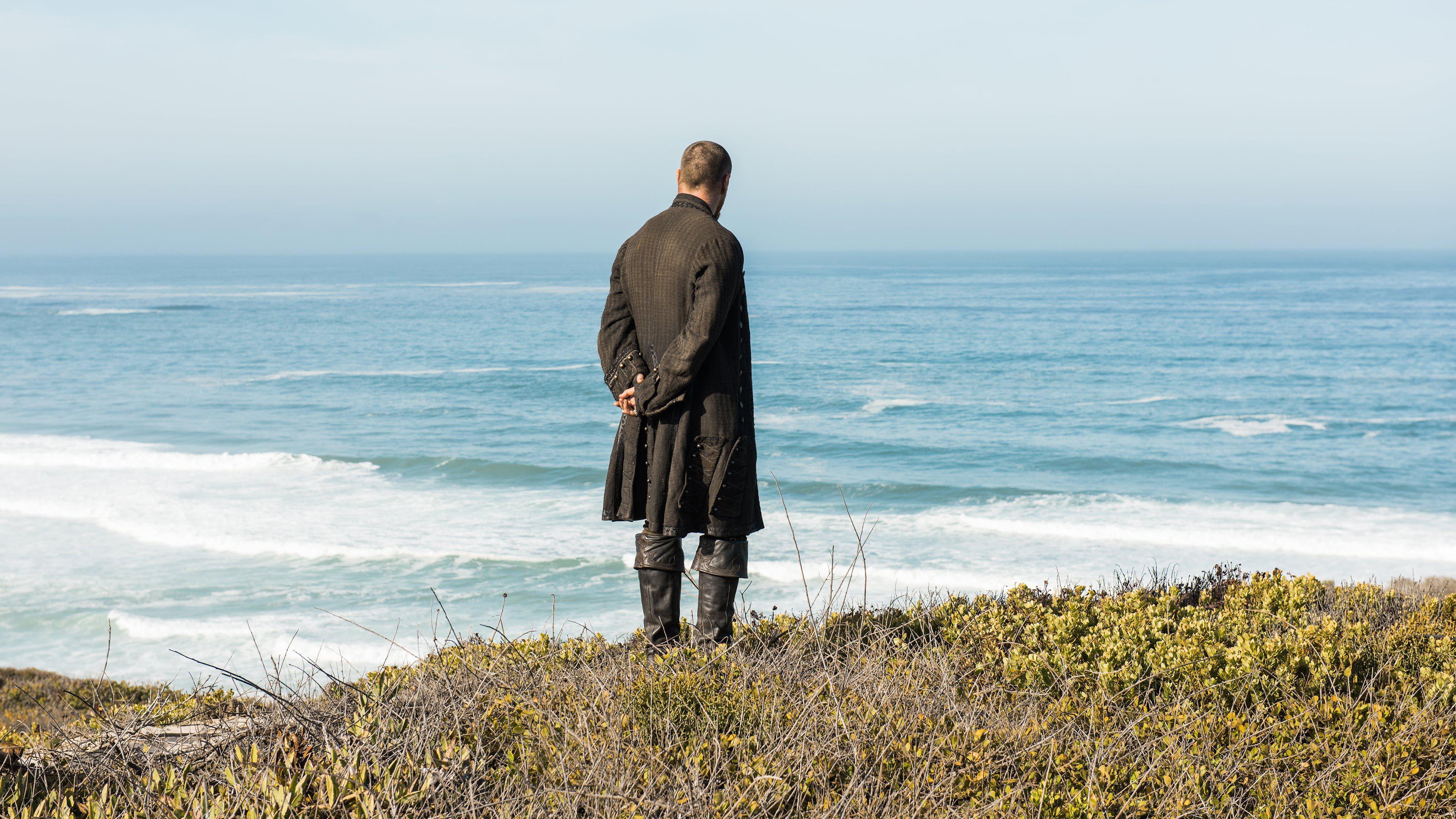 A story is true. A story is untrue. As time extends it matters less and less…

„Let me tell you a story about a Spaniard named Vasquez” was written on 2022-06-20 by Maciej Łebkowski.