This will probably not age well, but I wanted to share my thoughts either way. A bunch of things happened recently that made thinking. Namely:

I’m quick to code. There are a lot of reasons for that: I’m experienced, I have little to no blockers, I can make optimistic micro-decisions as I go without waiting for confirmation, the app contains no secrets in terms of technology for me. This has two sides obviously: I am often not so thorough with testing for example. 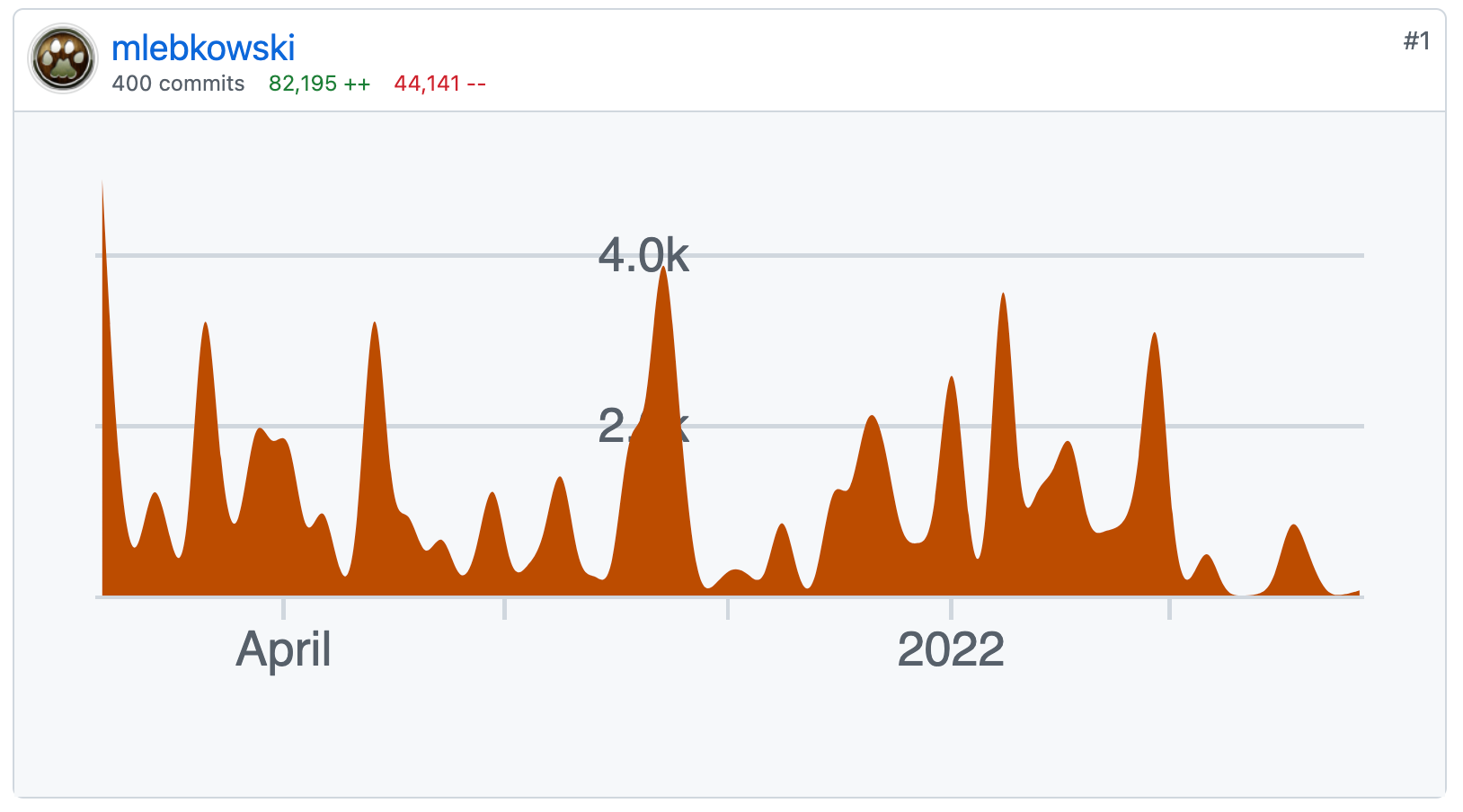 Anyway, this high pace leaks into the business side as well, and can be quite addictive. I rush to complete yet another task. I want to clear the board as soon as possible. I want to drop what I’m working on to fix a bug that was just reported. And I want to close as many tickets before the sprint ends to increase velocity (just to gain those meaningless internet points).

Yeah, but I’m getting a little ahead of myself. At one point I stopped to wonder: why should I keep working this way? This obviously puts unhealthy pressure on the rest of the team, which has more obstacles to achieving such a high pace. We’re not comparing velocities, but this must work on a subconscious level too. And I know my haste caused misunderstanding and frustration among the team members.

On the other hand, to what end am I sprinting? What will it change if the team will complete this feature on Wednesday instead of Friday? Will it make any meaningful impact on the product, or on the team? I don’t think it will. It turns out, that maybe I’m not only engaging in an unhealthy workstyle, but also an unwarranted one?

So if making more stuff faster isn’t satisfactory, what is? Let’s start with the opposite: what doesn’t motivate me. I have this goal of building a well-oiled team, that creates a successful product by maintaining a great engineering culture, yada, yada. That’s obvious, this is the first and foremost reason why I’m here. But that doesn’t seem the thing that brings me joy.

I got to that conclusion after I realized that it doesn’t matter that much if we deliver features slightly faster, or slightly slower. Most of them won’t event directly influence our business goals (like revenue or NPS). Growth does not appeal to me personally. I don’t care if we’re a garage firm, or a unicorn, or Fortune 500. And as I look at my past projects, I enjoyed working on those that reached millions, as well as on those that targeted merely dozens of people (or only myself, for that matter).

Trying to reach KPIs will still cause the dopamine rush, like with any numerical goals. It’s fun to be 5% better than during the last period. But in the end, it’s all temporary, and it’s all just numbers. What makes X% growth acceptable over Y%? Where is the limit? If we reach X, should we go for 110% of X next time? There might be an external motivation to pursue those (stakeholders), but for me — no internal one.

Maybe I’m just tired of hearing this from all around me. Personal growth and development is the number one motivator for everyone, it would seem (at least if we watched the world through the lens of linkedin and recruitment processes). But I think it’s artificial. Something you were taught to say and think. At least for me it feels this way.

I was never ambitious. Not in a common understanding of this term. I never chased goals, careers, I was never relentless in pursuing my targets, never had a roadmap of things I need to learn. Maybe because learning always was easy for me and I didn’t need to stress about it, or maybe this rationalization doesn’t matter for the issue at hand.

This surfaced more and more with experience. I quickly reach comfortable levels of competence in various fields and it no longer motivates me that much to specialize. I still grow, and learn, and experiment, and I’m curious about other areas, but it’s far from being my primary motivation, especially since I know that it will happen regardless of everything else.

Making a positive impact on the world is not so much a positive motivation, as a negative one. That is, I would feel shitty if the product I was building didn’t create tangible and positive value for end-users. Think: crypto or fintech. I have no idea why people would feel satisfaction working in those industries. Hype and higher salaries maybe? It feels so alien to me.

I talked to a co-founder of a fast-growing startup some time ago. And they emphasized how they want to surround themselves with people passionate about the cause. They genuinely believed they are changing the market, introducing new consumer habits and bringing positive change to the world. All I saw was a new variation on e-commerce and a new distribution channel for large corporations.

I’m not hyped up that easily. I’m old and grumpy. This does not make my heart beat faster.

I’m currently still under the influence of the great writing behind the Black sails series, so I naturally try to draw parallels. There are a lot of characters there, and they either clash over a difference of opinions, or work together towards common goals. Like, they are a team. But despite that, each of them has different motivations, drivers, and takes satisfaction from various things:

Seriously, the characters there are so well though-out and diverse, I couldn’t recommend it highly enough, go watch it now.

I’m definitely in the people camp. Maybe it doesn’t come easy to me, but it’s so satisfying to build meaningful relationships. To go towards a common goal despite our differences. To help and support each other. To share victories and defeats. To be curious about the next person. And to be a part of your path to success.

I’m engulfed in technology. Many people see me as this analytical brain, that’s maybe a bit socially awkward, but has no problems communicating with machines. That might be so, but I find no satisfaction in solitude with machines. That gets old really quick.

My programming history didn’t start with a deliberate goal of me being a software engineer. It was just a means to solve problems. For me and people around me. And even before I started my professional career I turned to Usability and HCI studies (one of my first career paths was to be a usability evangelist: convincing people to certain technical solutions). I can’t remember precisely, but it must’ve been the words of Łukasz Grabuń — two decades ago, when he still wrote a blog — that resonated that well with me: computers are boring, it’s the human interaction that makes them interesting. And then, one of the more memorable pieces of feedback I received (a decade ago from Erwin Wilczyński): was that I have the rare skill to fluently communicate with both computers and humans.

This is what brings me satisfaction. This is something I want more of in my daily work.

We are different. We shouldn’t assume we’ll take the same path, or that the same things are important to us, despite being a team with a common goal. Now you know me a little more, but I want to go a step further: speculate on how we can interact in light of those distinct drivers, and what are the obstacles we might face.

To those that want to grow a product

I will be there right beside you. Share your goals, targets and KPIs with me, and I will be the driving force that will help you arrive there. They might not matter that much to me, but I want to see you succeed, and it will bring me great pleasure to be a part of the solution.

To those that focus on personal growth

This might no longer be a goal for me, but I’m still an experienced developer, manager, storyteller, product person, and what have you. I’m happy to share experiences, stories about spectacular failures or achievements, a different point of view, or just become your rubber ducky. Or you can also just follow my footstep if that’s your game.

Just remember that it’s you that is behind the wheel, and I’m barely the navigator.

To the crazy ones

To the misfits, rebels, trouble makers, the round pegs in square holes. The ones who see things differently.

You want to change the world, and you will, and I want to be infected with your enthusiasm. I might not know or understand the vision or the change you want to achieve, but I sure can build us a spacecraft to get there, and see to it that everyone can play their part in arriving there.